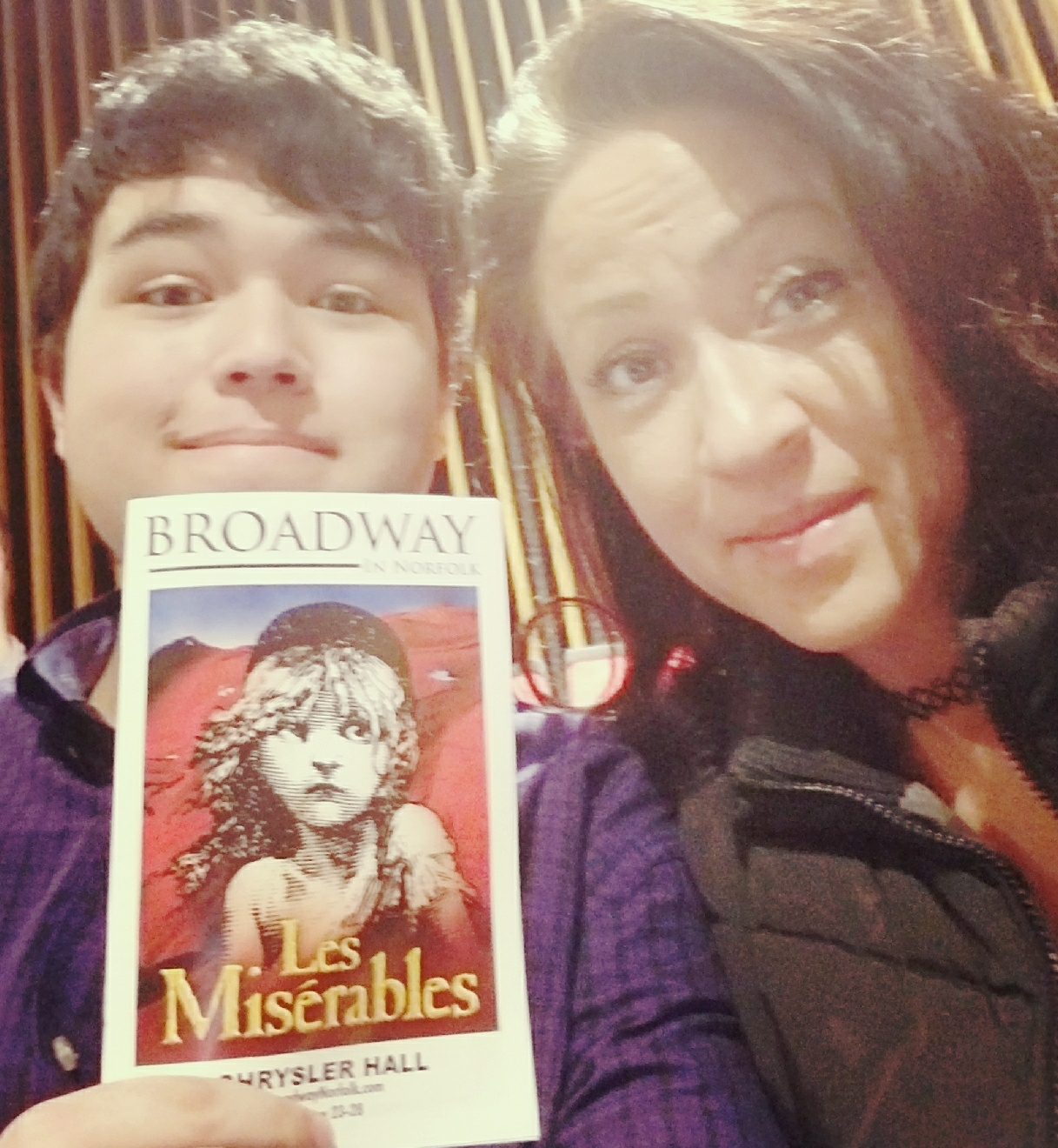 I drove to Norfolk, Virginia on Saturday to take my oldest son, Emerson, to see Les Miserable. It was the first Broadway production I ever saw almost thirty years ago in New York City and it was his first time of seeing it live. I was his age when I first laid eyes on an actual Broadway production and was in complete awe.

As I watched the thrilling performance at Chrysler Hall, though, I felt a little confused. I had seen it on Broadway twice during my days at NYU but I didn’t remember all the references to God. How could it have been that I didn’t realize the entire show is about Grace and redemption? The main character Jean Valjean experiences one single act of grace in the name of God and is redeemed. His nemesis chases him relentlessly because of his overwhelming need for ‘justice’ in the name of God and is doomed. Was I just not remembering well because it was so long ago? Or was it because my 18 year old heart would not have even noticed the love story between God and Jean Valjean but would have identified with the love story between his adopted daughter and her suitor? Both are “love at first sight, I can’t live without you” stories but only one, at the time, was my fairy tale. It would take many years before the other was my truth.

I watched the performance through the eyes of my then 18 year old undiscovered self and the now 47 year old mother I have become. One lense clear but naive and the other worn but all the more wise.

In one of the songs Jean Valjean sings

“He gave me hope when hope was gone. He gave me strength to journey on.”

As my 18 year old self I would have had no clue what that meant. That single, climatic line from an entire song would have been lost on me. I had never lost hope before. I had two parents who loved me. I had piano and ballet lessons. My parents attended every recital. I had no situation ever in which I felt hopeless because I had not yet faced off squarely with adversity. I never needed strength to journey on in my middle class home in a quaint little town nor in a private university in, arguably, the greatest city on Earth. Life was charmed and it was all I knew.

My 47 year old agreed whole heartedly with that line as evidenced by the tears in my eyes as it was sung. How many times, I thought, in the last 30 years had I lost hope?

There was the time Wesley was a year old and in the Pediatric Intensive Care Unit. He was terribly sick. He was dying. Every specialist at the hospital came to see him. For unknown reasons his liver functions were terribly elevated. The lead physician offered this to me, “We do not know why he is sick or if he will get better. We do not know how to treat him because we don’t know what we are treating. If you pray…I would just pray.”

I heeded his advice and though for years I had only been attending church on Easter and Christmas I found my way to the chapel in the hospital. It was the first time in a long time I had spoken to Him. He welcomed me back and answered in the way I asked. The next day Wesley miraculously turned the corner. As unexplained as the illness was they could offer no explanation for his recovery. But I could.

A few years later Wesley wanted to go downstairs to see his sister who was watching television in the basement. Unbeknown to me, he figured out how to open the door at the top of the stairs. Since he did not have the physical or cognitive ability to walk down the stairs he fell, went over the banister, and hit his head on the marble floor. When I heard Leah’s screams and saw him on the floor with hands and feet retracted I knew he had a brain injury. The CT confirmed his brain was bleeding. The neurologists spoke similar words to me when he said, “Do you have family to come be with you? We do not know if the bleeding will stop but there is nothing we can do. It is a wait and see but you should prepare yourself.”

This time I did not find the chapel. Sitting in a metal chair in the sterile hallway of the hospital I bowed my head and cried the simplest prayer but the only words I could gather:

“Please just give me the strength to face whatever it is I must.”

It would become my anthem and I would repeat that prayer again and again in the years to come.

On February 10, 2011 I found my husband dead in the woods behind our house. I had left him ten minutes before after we finished praying together. No heroic attempts were made to revive him by paramedics. Even I knew it was too late.

Later that evening I had to tell Emerson when he returned from school that his father was dead. It was the single most difficult conversation I have ever had.

His best friend’s mother was immediately called after Gary died. She was asked to take Emerson home because the police would likely still be at the house when school was out. She graciously took him to his favorite restaurant with her family before bringing him home. Her husband walked Emerson in and didn’t speak a word but his eyes told me he was sorry and that we were loved. In Chauncey’s face at that moment I saw God and I recognized the beauty in the midst of unbearable ugliness. It was a tiny shred of hope in the knowing that I was not alone.

By the time I was 40 I was well acquainted with hopelessness and I despised her. Yet having fought her before I knew she could not defeat me because I knew God would give me hope when hope was gone. I wish I could say it was instantaneous and prolonged. I wish I could write that I did not spend time in that purgatory of waiting but I can’t. It was a process, at times an excruciatingly slow process, but it emerged.

There are times in life when all you can do is hope for hope.

God gave me strength to journey one. In the early days after Gary died there were times all I could do was one thing per day. After whatever the task was I had to lay down and recharge. The smallest upset could make me feel unraveled. I was raw to the core.

Another strong theme that escaped me as a young woman watching Les Miserable was Grace. I once heard a speaker say that we really can’t understand grace until we have to ask for it.

My 18 year old self would not have needed much grace. I had not yet hurt someone deeply. My infractions, though a headache to my parents were nothing beyond normal teen age rebellion. The current woman sitting in that theater had asked for grace time and time again. I have a long list of violations that not only hurt other people, they broke the very heart of God. I know Grace. I know it well.

Finally, the theme of sacrificial love would not have been on my radar as an 18 year old young woman. I was the recipient of incredible sacrificial love but I didn’t know it as such. It never occurred to me what my mother sacrificed as she drove me five nights a week and sat in the car while I had ballet lessons. I did not consider my exhausted father coming home from work. My very attendance at NYU was sacrificial love from my parents yet at the time I sadly admit I did not appreciate what it took to have me at that school.

My 47 year old self knows sacrificial love because I have children who are the greatest conduits for that. To me it just feels like love but there are times it is sacrificial. There are moments when I feel ill but must put my needs aside and care for my children. The very nature of parenthood, when done well, is sacrifice. It is loving someone more than you love yourself. As a teenager I believed I was the center of the universe. I simply could not love anyone more than myself because I never had to. As a woman worn from scars, it is the only way I love. To me it is just not worth it to love any other way.

To love another person is to see the face of God. 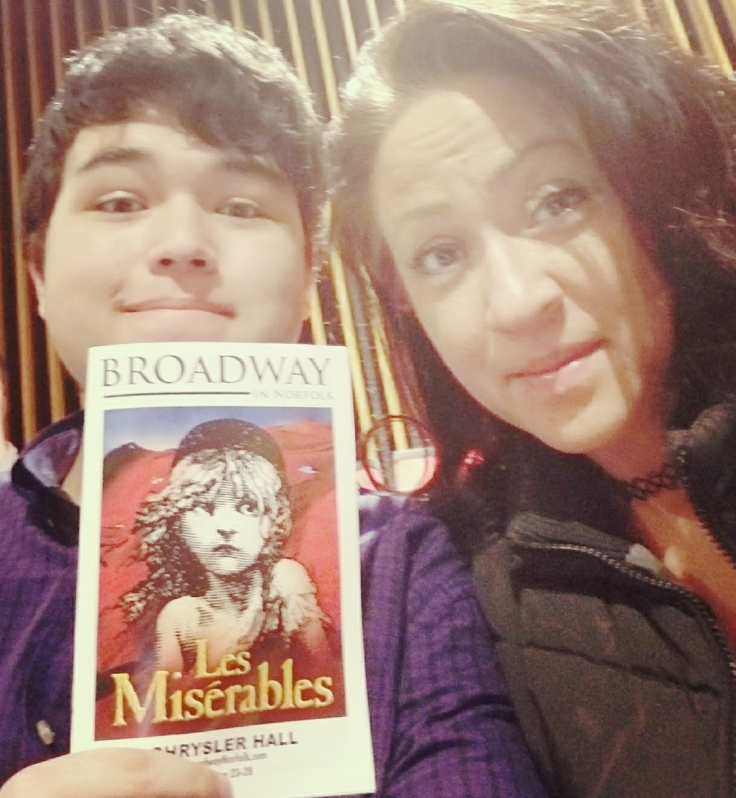 I glanced over at my son during the performance, painfully but joyfully aware that my truth at 47 is his at 18. He is not like I was because he has endured everything that I have. He slept in hospital rooms with me. He saw his father laying in a casket. He stood next to me, arms raised praising God even at his own father’s funeral. To quote his own words, “We sail on the same tattered but triumphant ship.”

I am grateful that he did not have to wait thirty years to know love on God’s level but it breaks my heart that he has had to experience incredible adversity for this achievement. He is only 18 but carries with him the wisdom of a lifetime. This mother’s heart knows it will not be wasted because God never wastes a single thing. Not one tear will He leave unredeemed.

He gave me hope when hope was gone. He gave me strength to journey on.

To love another person is to see the face of God.