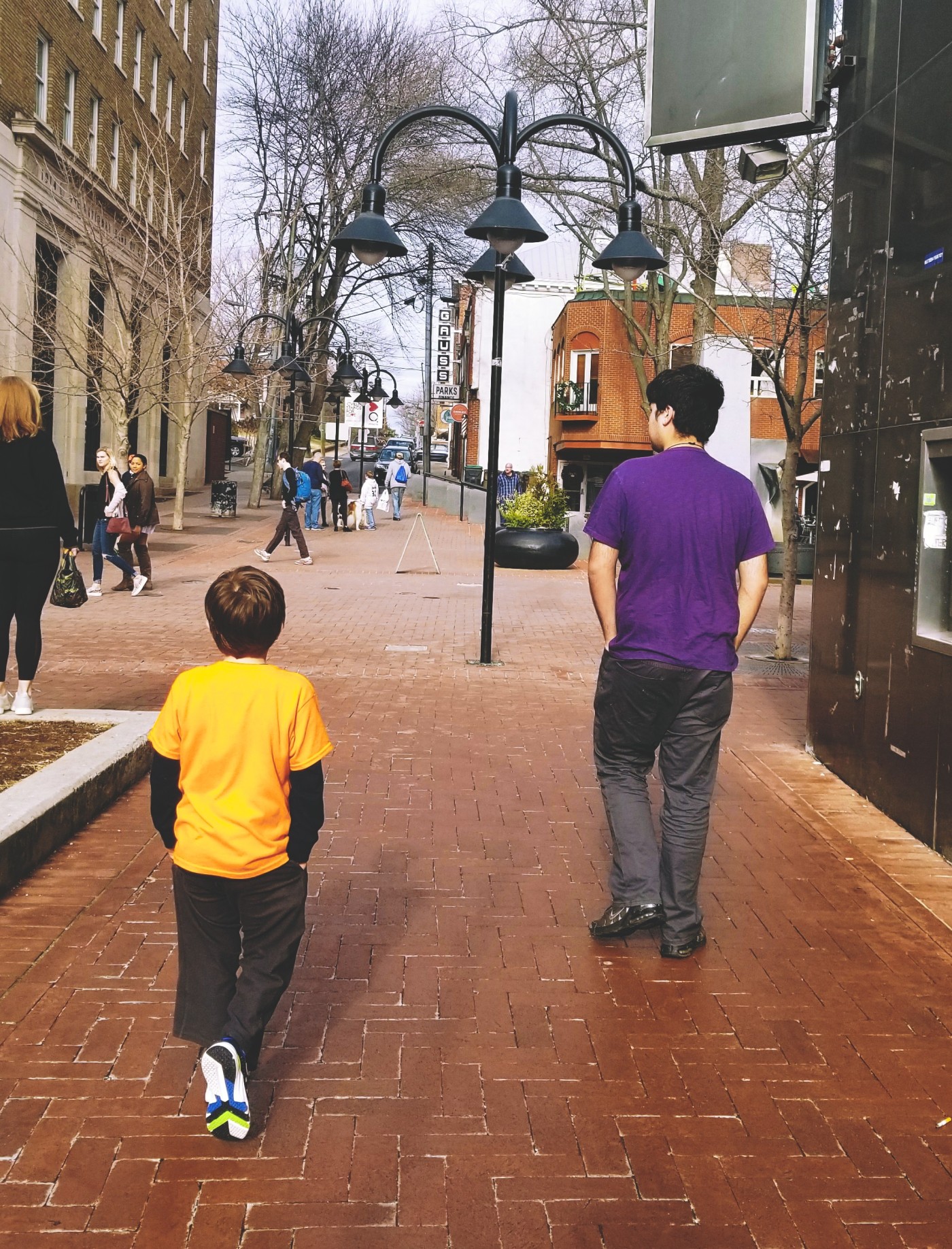 These two are my bookends. They are both bright, sweet, considerate, and wonderful sons. They are both enormously protective and loving toward me. Some would even say they are momma’s boys.

They both also have no father but they are not fatherless.

Emerson had a father long enough to know what his absence means. Nathan, however, knows no other family than one without a father. Yet here he is following his big brother through the downtown mall in our beloved little community with his little hands in his pockets trying his best to emulate his big brother.

It is daunting trying to raise boys into mighty men with no father in the home.  As a woman I am tasked with teaching my boys how to be men. I realize that in my lifetime there has been a dramatic shift in parenting and traditional roles. Families come in all variations but my truth is that from my upbringing and in social sphere my family is different than everyone else’s. Very different.

I can attempt to teach my boys to be men but, if I am being truly vulnerable, I admit there are times I am not sure what I am doing. My confidence is shaken when I consider the best coaches were once athletes. They know the intricacies of the game someone from the sidelines could not. Understanding what it is to be a man is not that same as being a man.

When Emerson needed to begin wearing a tie to Chapel in seventh grade we had to look on YouTube to learn to tie one. When he had to begin shaving, Wesley’s in home support had to show him. There are things he experiences in life that I never have simply because we are different genders.

Nathan didn’t realize that families were different than ours until he began school. Suddenly he noticed dads picking up their kids. He saw them playing together at birthday parties. He realized what had been missing and it hurts his little heart.

We hear that God is father to the fatherless so often it almost seems cliche’ but He is. He protects, provides, and guides. His Presence in our lives is not a consolation prize, it is the main thing. However, sometimes a young man wants to have physical arms hug him and to toss a football. He needs to ask his dad questions and broach subjects that might be embarrassing to do so with his mother.  Over the years God has sent some incredible men to stand in the gap for my boys. They are teachers and loved ones. They are men who made them feel safe, loved, and worthy.  They can proclaim, like Job “I rescued the poor who cried for help, and the fatherless who had none to assist them.” (Job 29:12)

An excerpt from an article Emerson wrote for school tells me my hopes and my prayers have already been answered abundantly. His words are brutally honest. They are vulnerable. They are brave. They are him.

The life we anticipated wasn’t the one we got and for a while we were at sea enduring the tempests of abandonment and loss. Its easy to look at us  – a widow, a divorced elderly woman, three fatherless sons – and say we don’t have a home as I’ve described it. But we do. We have the same scars, the same fears, and the same hopes because we’ve been battered by the same storms. And we all sail on the same tattered but triumphant ship.

Home is imperfect people challenging each other’s imperfections because beyond the scars and gnarls and twists, they see something true and beautiful  in each other, something beyond what the world has done to them, something that can never be taken away. Home is the shelter for the human soul.

That is what we are – tattered but triumphant.  It is not who we are. We are not fatherless. We are not abandoned. We are grateful. We are home.