“Expectation is the root of all heartache.”

Have you ever asked a pregnant woman if she was hoping to have a boy or girl? More often than not her response is, “I don’t care as long as it is healthy.” But what happens when your baby is born and it is not healthy? What happens when they hand him to you and say words like “genetics, syndrome, anomalies, life long challenges.” What happens when your reality is the nightmare of others?

You hope but with a hope that is boiled down to its very simplest form. You no longer hope of tossing a football or ballet lessons. You hope that the medicine stops the seizures. You hope you can learn to run a feeding tube pump. You hope the surgery is successful. You hope the doctors are wrong and that your baby will live to see another day. You hope you will somehow survive if they are right.

When I learned to hope for the very basic necessities in order for my son’s life to continue I learned to be thankful for everything else. There have been several times in Wesley’s life when there wasn’t even an expectation he would live. In the absence of expectation hope is still not defeated and the way is paved for something far greater. I have learned to live with no expectations. The fruit that blossomed from that barren tree is excessive gratitude.

When Wesley was an infant and toddler it was uncertain if he would ever walk, talk, or even eat by mouth. At one year old he weighed only fourteen pounds. His official diagnosis was “failure to thrive.” At the time I felt as if I should receive the diagnosis “failure to mother.” To my heart it was somehow my fault that my baby wasn’t growing appropriately. He wasn’t even on the growth chart, he was well below it.

His first birthday was spent in the hospital after receiving a feeding tube and to this day it remains part of him. For years I had to bolus feed him every four hours and hook him up to a pump at night. It was an intensive, time-consuming process. Not taping the tubing correctly could result in a kink and the alarm would sound. The tubing could and often did become disconnected but continue to pour thirty-two ounces of Pediasure into his crib. He would sleep right through it and I would find him the next morning soaked. When he finally could tolerate food placed in his mouth years later, even pureed, I was not disappointed that it was only stage 1 baby food. On the contrary, I was overjoyed that progress had occurred. I never expected him to eat so when he could I was exceedingly thrilled. At sixteen he still eats baby food but he eats.

He is non verbal other than the two words “Mom” and “Bob”. Those are his priorities – his mother and SpongeBob. He uses simple sign for other needs but decompensates when he cannot express something through sign language. He becomes self-injurious out of sheer frustration.

I used to pray every day that he would speak. I thought if he could he wouldn’t harm himself. I wanted to hear his beautiful voice say “I love you”. I wanted to know how his day was and what happened at school.

But the day never came when Wesley spoke. God answered, “No” and I don’t know why. Something as basic as speech was a milestone he would never hit. I never expected for Wesley to talk so I am not heartbroken that he doesn’t. I hoped, yes, but instead of living in what didn’t happen I move on. I focus on the things he can do and am grateful. I rejoice in the fact that Wesley does say “I love you” even if it is not in the way I hoped and most would expect. I hear it from his soul’s voice and there is no sweeter way to receive it.

Living outside the chart of normalcy can be a scary and wonderful place to exist. We have no guideposts telling us if we are on the right path or how far it is to the next stop. Yet there is incredible freedom. Our definition of excelling is the tiniest amount of progress and no accomplishment is too small for an all out dance party celebration.

When I finally learned to release my expectations I cleared the way for God’s. My disappointments are not His nor are my expectations. What we expect as a culture is not always, perhaps even rarely, the things which God expects. Our society does not value people with chromosomal abnormalities. We expect to have children with the near perfect DNA and above average intelligence. But just what if that wasn’t God’s expectation? What if His expectation is where there is life there is extraordinary value? What if He expects that child with a syndrome would bless every person who came into contact with him like my son does? What if God expects that child to be exalted because he teaches us to give and receive unconditional love? What if God expects us to realize what a privilege it is to have a child with special needs and not the burden as most of society thinks? What if God’s honor roll is not based on the contents of our intellect but the capacity of our hearts? I would declare that the contents of Wesley’s heart are exactly how God intends them to be and he enjoys a place on the highest honor roll.

How much more magnificent and rich yet simple would my life be if I could release all my expectations to allow room for God’s? As with all hopes, dreams, plans, and expectations God’s are always incomparably better. 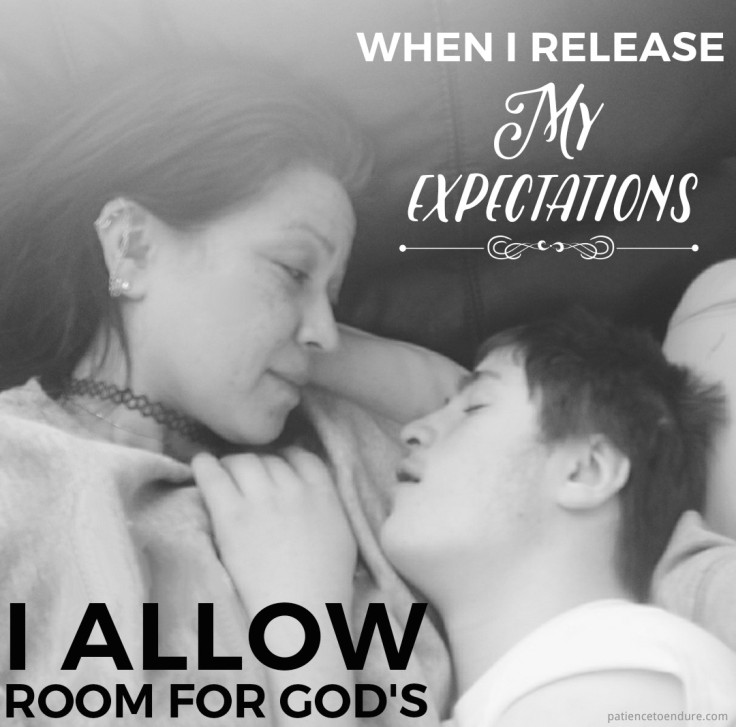